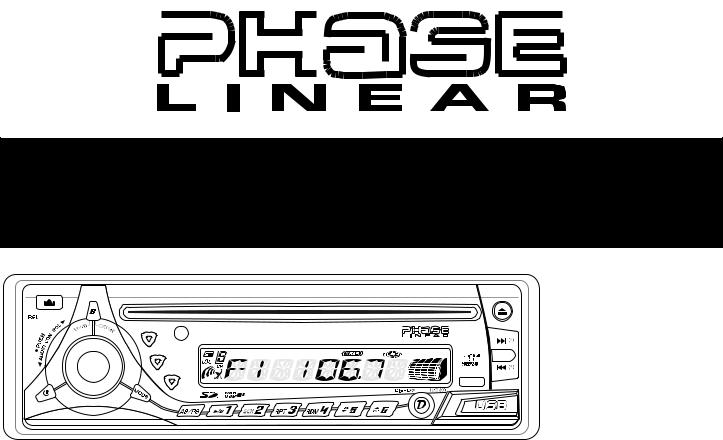 This unit is designed for installation in cars, trucks and vans with an existing radio opening. In many cases, a special installation kit will be required to mount the radio to the dashboard. These kits are available at electronics supply stores and car stereo specialty shops. Always check the kit application before purchasing to

The following tools and supplies are needed to install the radio.

Before you begin, disconnect the battery negative terminal. 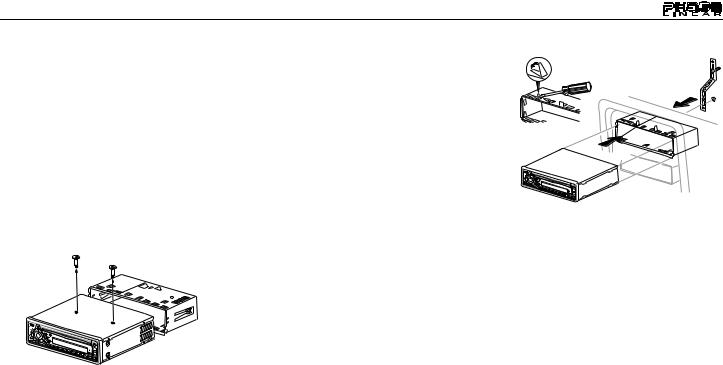 This unit is designed for installation in cars, trucks and vans with an existing radio opening. In many cases, a special installation kit will be required to mount the radio to the dashboard. These kits are available at electronics supply stores and car stereo specialty shops. Always check the kit application before purchasing to make sure the kit works with your vehicle.

Before you begin, always disconnect the battery negative terminal.

1.Remove the detachable front panel, if it is attached to the chassis, by pushing the “Release” button.

2.Slide the mounting sleeve off of the chassis if it has not already been removed. If it is locked into position, use the removal keys (supplied) to disengage it. The removal keys are depicted on page 5.

4.Locate the series of bend tabs along the top, bottom and sides of the mounting sleeve. With the sleeve fully inserted into the dashboard opening, bend as many of the tabs outward as necessary to firmly secure the sleeve to the dashboard.

5.Place the radio in front of the dashboard opening so the wiring can be brought through the mounting sleeve.

6.Follow the wiring diagram carefully and make certain all connections are secure and insulated with crimp connectors or electrical tape to ensure proper operation.

7.After completing the wiring connections, attach the front panel and turn the unit on to confirm operation (vehicle ignition switch must be on). If the unit does not operate, recheck all wiring until the problem is corrected. Once proper operation is achieved, turn the ignition switch off and proceed with final mounting of the chassis.

8.Carefully slide the radio into the mounting sleeve, making sure it is right-side-up, until it is fully seated and the spring clips lock it into place.

9.Attach one end of the perforated support strap (supplied) to the screw stud on the rear of the chassis using the hex nut provided. Fasten the other end of the perforated strap to a secure part of the dashboard, either above or below the radio, using the screw and hex nut provided. Bend the strap, as necessary, to position it. CAUTION: The rear of the radio must be supported with the strap to prevent damage to the dashboard from the weight of the radio or improper operation due to vibration.

10.Re-attach the front panel to the chassis and test radio operation by referring to the operating instructions for the unit.

NOTE: For proper operation of the CD player, the chassis must be mounted within 20° of horizontal. Make sure the unit is mounted within this limitation.

1.Wire and test the radio as outlined in the Universal Installation instructions.

2.Install the radio/mounting plate assembly to the sub-dashboard according to the instructions in the installation kit.

3.Attach the support strap to the radio and dashboard as described in the Universal Installation instructions.

This unit has threaded holes in the chassis side panels which may be used with the original factory mounting brackets of some vehicles to mount the radio to the dashboard. Please consult with your local car stereo shop for assistance on this type of installation.

1.Remove the existing factory radio from the dashboard or center console mounting. Save all hardware and brackets as they will be used to mount the new radio.

2.Carefully unsnap the plastic frame from the front of the new radio chassis. Remove and discard the frame.

3.Remove the factory mounting brackets and hardware from the existing radio and attach them to the new radio. Do not exceed M5 x 9 MM maximum screw size.

Longer screws may damage components inside the chassis.

4.Wire the new radio to the vehicle as outlined in the Universal Installation instructions.

5.Mount the new radio assembly to the dashboard or center console using the reverse procedure of step 1.

When wiring is complete, reconnect the battery negative terminal.

To remove the radio after installation, remove the trim ring by lifting in the center and pulling it off from either side. Insert the removal keys straight back until they lock, and then pull the radio out. If removal keys are inserted at an angle, they will not lock properly to release the unit. 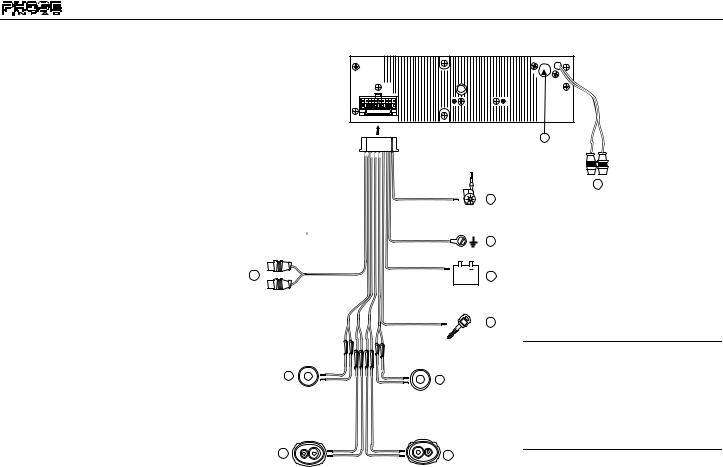 4.Memory/Battery (yellow wire) - Connect to battery or 12 volt power source that is always live. The radio will not work if this wire is not connected.

When replacing a fuse, make sure the new fuse is the correct type and amperage. Using an incorrect fuse could damage the radio. The SD1411 uses one 15 amp fuse located below the wiring connector (15 amp fast blow ATO). 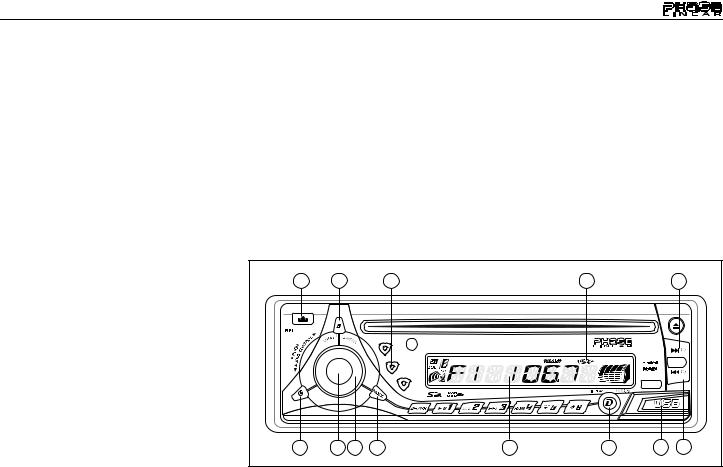 Press MODE (2) to select a different mode of operation as indicated on the display panel. Available modes include Tuner, CDP PLAY, SD PLAY, USB PLAY and AUX. During CD player operation, pressing MODE will change to the tuner mode without ejecting the disc. To access the Auxiliary Input mode, press the MODE button until "AUX" is indicated in the display.

Press the AUDIO CONTROL button (4) to step through the menu of audio functions: volume (VOL), bass (BAS), treble (TRB), balance (BAL), fader (FAD), and volume (VOL). When adjusting audio functions, the unit will automatically exit select mode and return to the normal display after five seconds or when another function is activated.

clockwise or counter clockwise to adjust the bass from “-10” to “+10”. “00” represents a flat response. The bass level is shown on the display for five seconds or until another function is activated. 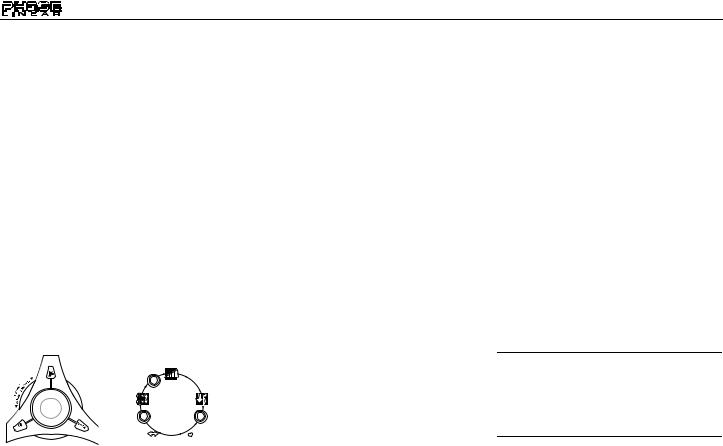 Press the AUDIO CONTROL button (4) four times until “BAL” appears in the display. Within five seconds, turn the AUDIO CONTROL (3) clockwise (or counter clockwise) to adjust Balance between the right and left speakers from “BAL 10R” (full right) to “BAL 10L” (full left). “BAL L=R” represents an equal balance level between the right and left speakers. The balance position is shown on the display for five seconds or until another function is activated.

Press the AUDIO CONTROL (4) five times until “FAD” appears in the display. Within five seconds, turn the AUDIO CONTROL (3) clockwise or counter clockwise to adjust balance between the front and rear speakers from “FAD 10R” (full rear) to “FAD 10F” (full front). “FAD F=R” represents an equal balance level between the front and rear speakers. The fader position is shown on the display for five seconds or until another function is activated.

(6) to mute the audio volume. “MUTE” flashes on the display. Restore volume to the previous setting by pressing the mute button again, adjusting the AUDIO CONTROL, or by pressing any other button on the unit.

•BEEP ALL: Beep is heard any time a button is pressed (function activated).

•BEEP 2ND: Beep is heard only when a secondary function is activated (press and hold).

•BEEP OFF: Beep is not heard.

The liquid crystal display (LCD) panel (8) displays the frequency, time and activated functions of the unit, including an audio level indicator, which appears as a bar graph depicting the audio signal. In addition, the display contains a receive signal indicator that depicts the relative strength of the incoming broadcast frequency.

NOTE: After being subjected to cold temperatures, LCD panels may take longer to respond and visibility of the numbers on the LCD may decrease slightly. The LCD display will return to normal when the temperature increases to a normal range.