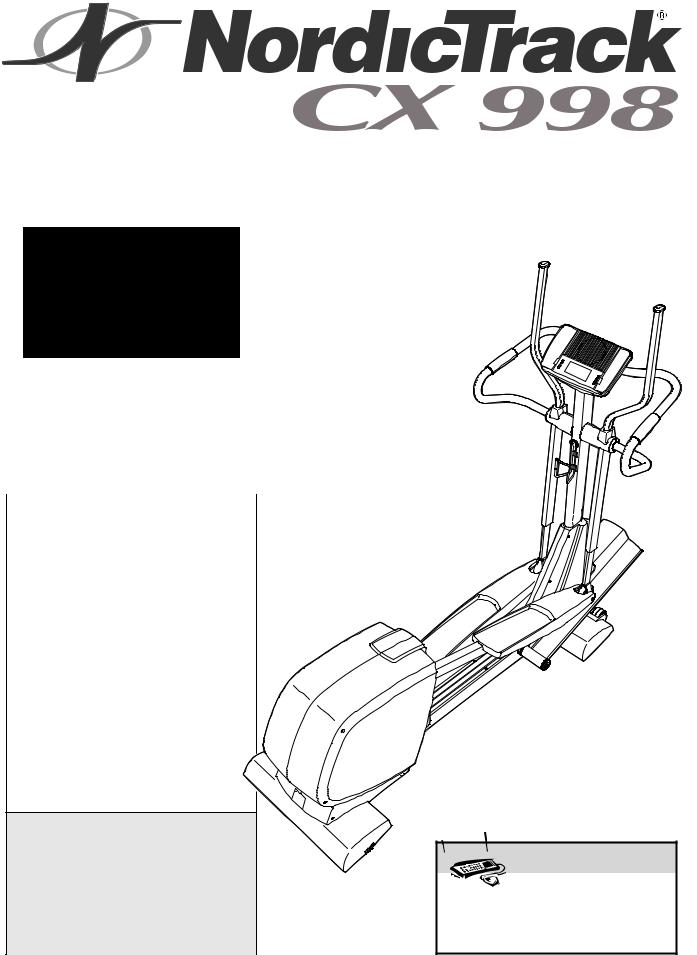 As a manufacturer, we are committed to providing complete customer satisfaction. If you have questions, or if parts are damaged or missing, PLEASE CONTACT OUR CUSTOMER SERVICE DEPARTMENT DIRECTLY.

Read all precautions and instructions in this manual before using this equipment. Keep this manual for future reference.

NordicTrack is a registered trademark of ICON IP, Inc. 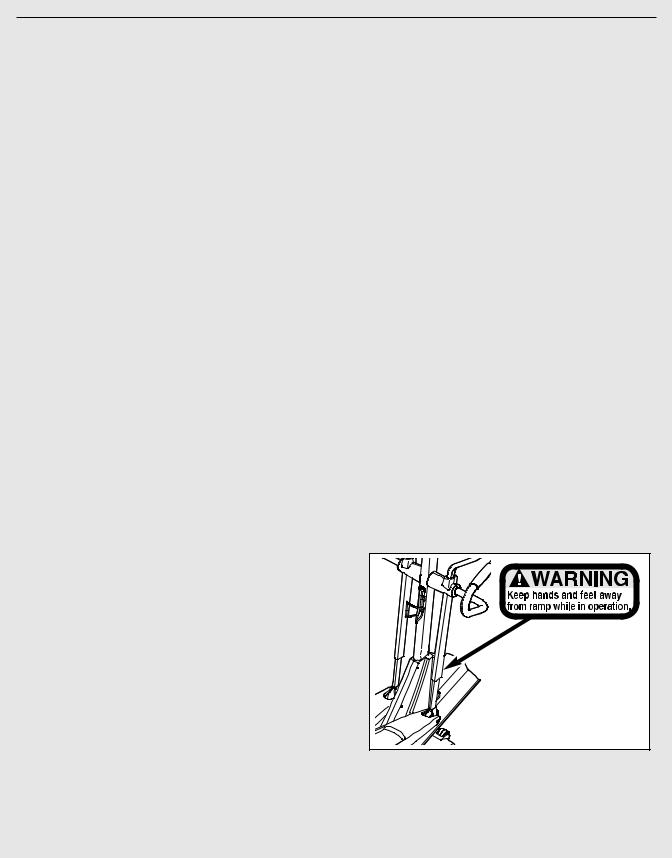 WARNING: To reduce the risk of serious injury, read the following important precautions before using the elliptical exerciser.

2.It is the responsibility of the owner to ensure that all users of the elliptical exerciser are adequately informed of all precautions.

6.Keep children under age 12 and pets away from the elliptical exerciser at all times.

7.The elliptical exerciser should not be used by persons weighing more than 250 pounds.

9.Always hold the handlebars when mounting, dismounting, or using the elliptical exerciser.

10.Keep your back straight when using the elliptical exerciser; do not arch your back.

11.If you feel pain or dizziness while exercising, stop immediately and cool down.

13.When you stop exercising, allow the pedals to slowly come to a complete stop. The elliptical exerciser does not have a free wheel; the pedals will continue to move until the flywheel stops.

14.Always unplug the power cord immediately after use and before cleaning the elliptical exerciser.

15.The decal shown below has been placed on the elliptical exerciser. If the decal is missing or illegible, call the toll-free telephone number on the front cover of this manual and order a free replacement decal. Apply the decal in the location shown. 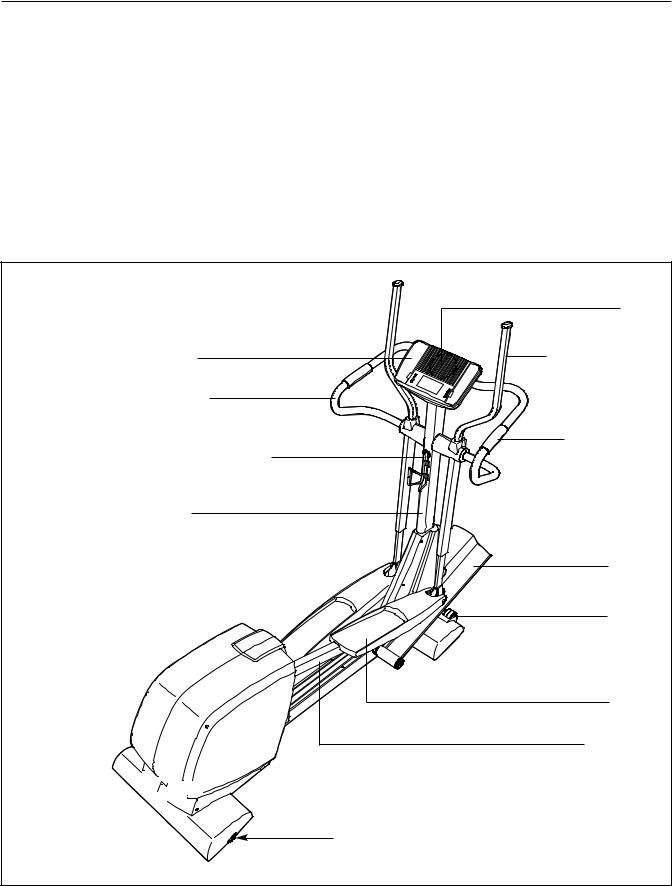 Congratulations for selecting the new NordicTrack® CX 998 elliptical exerciser. The CX 998 is an incredibly smooth exerciser that moves your feet in a natural elliptical path, minimizing the impact on your knees and ankles. And the unique CX 998 features adjustable resistance and incline to help you get the most from your exercise. Welcome to a whole new world of natural, elliptical-motion exercise from NordicTrack.

For your benefit, read this manual carefully before you use the elliptical exerciser. If you have ques-

Before reading further, please familiarize yourself with the parts that are labeled in the drawing below.

*No Water Bottle is included. 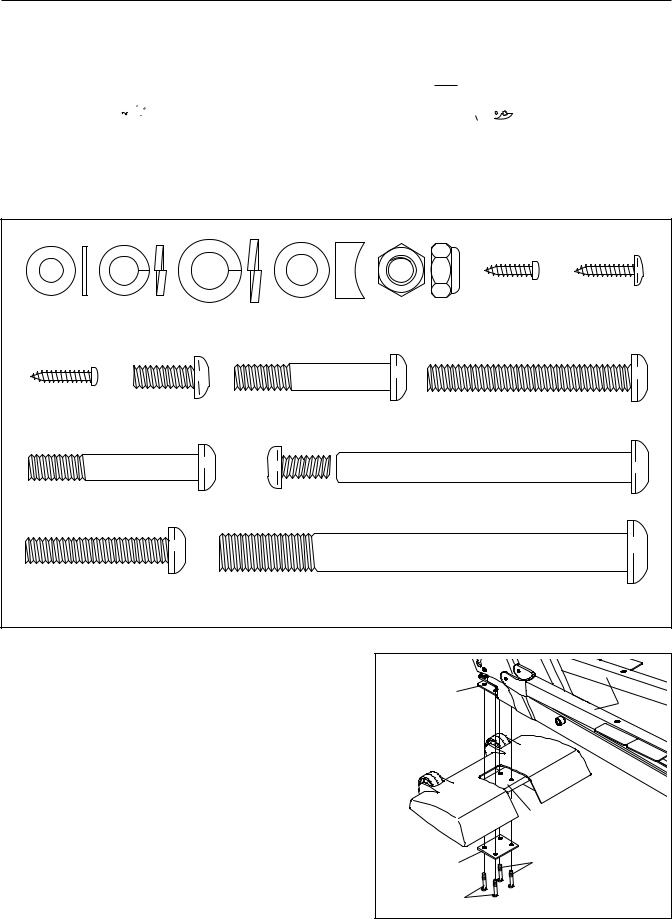 As you assemble the elliptical exerciser, use the drawings below to identify the small parts used in assembly. The number in parenthesis below each drawing is the key number of the part, from the PART LIST on pages 24 and 25. The second number is the quantity used in assembly. Note: Some small parts may have been preassembled. If a part is not in the parts bag, check to see if it is pre-assembled.

4.Have another person hold the Upright (2) in the position shown. 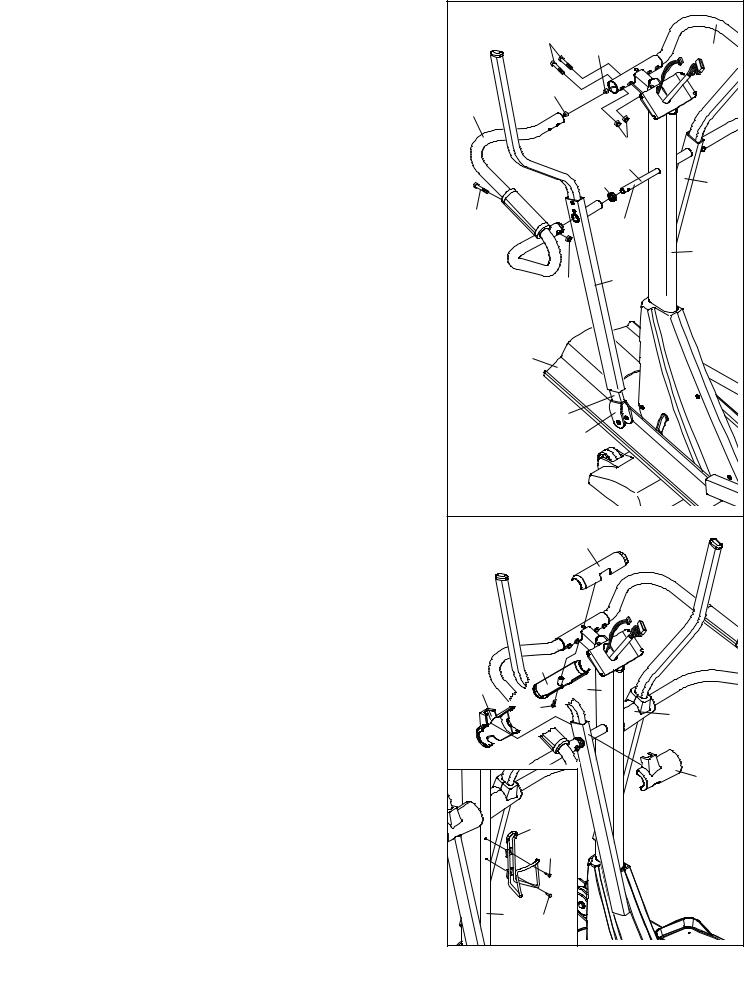 Have another person hold the Left Handlebar (24) near the Upright (2) as shown. Connect the left Pulse Sensor Wire (20) to the Pulse Extension Wire (114).

6.Look inside one of the Handlebar Cover Sets (26) and locate the square tabs connecting the two halves. Gently lift the tabs and disconnect the halves.

Hold the two halves of the Handlebar Cover Set (26) around the tube on the left side of the Upright (2). Align the halves and press them together until they lock.

Attach the other Handlebar Cover Set (26) to the right side of the Upright (2) in the same way.

Hold the halves of the Upper Handlebar Cover (25) around the tube on the front of the Upright (2); be careful not to damage the Wires (not shown).

Attach the Upper Handlebar Cover with an M4 x 12mm Round Head Screw (96).

Repeat this step on the right side of the elliptical exerciser.

Carefully insert all excess wiring down into the Upright 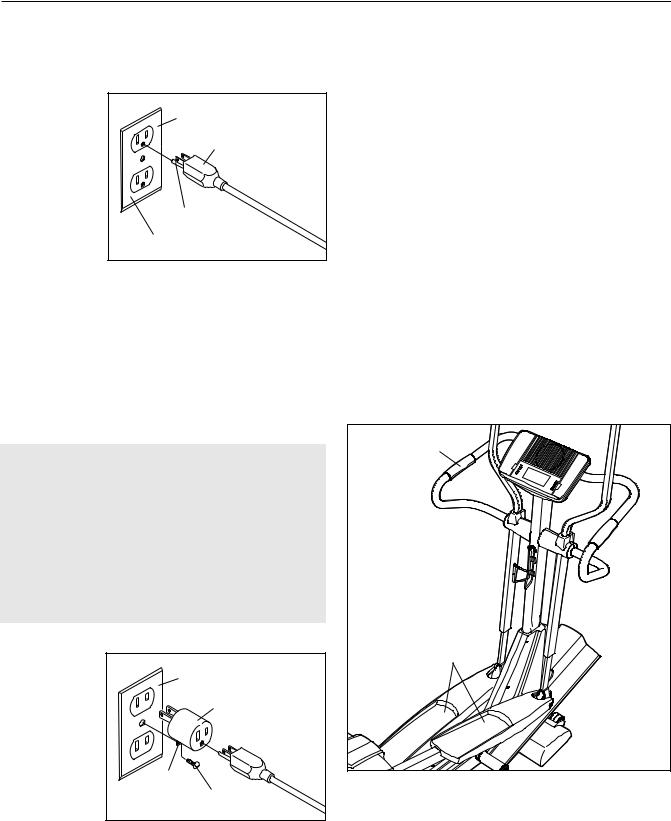 HOW TO USE THE ELLIPTICAL EXERCISER

HOW TO PLUG IN THE POWER CORD

This product must be

If it should malfunction

or break down, grounding

provides a path of least resistance for electric

current to reduce the risk of electric shock. This product is equipped with a cord having an equipmentgrounding conductor and a grounding plug. Plug the power cord into an appropriate outlet that is properly installed and grounded in accordance with all local codes and ordinances. This product is for use on a nominal 120-volt circuit. Important: The elliptical exerciser is not compatible with GFCIequipped outlets.

DANGER: Improper connection of the equipment-grounding conductor can result in an increased risk of electric shock. Check with a qualified electrician or serviceman if you are in doubt as to whether the product is properly grounded. Do not modify the plug provided with the product—if it will not fit the outlet, have a proper outlet installed by a qualified electrician.

available. The temporary adapter should be used only until a properly grounded outlet can be installed by a qualified electrician.

The green-colored rigid ear, lug, or the like extending from the adapter must be connected to a permanent ground such as a properly grounded outlet box cover. Whenever the adapter is used, it must be held in place by a metal screw. Some 2-pole receptacle outlet box covers are not grounded. Contact a qualified electrician to determine if the outlet box cover is grounded before using an adapter.

Note: When the power cord is plugged in, the elliptical exerciser’s incline system may automatically calibrate itself. During the calibration process, three dashes (– – –) will appear in the console display while the ramp moves to the highest position and then returns to the lowest position.

EXERCISING ON THE ELLIPTICAL EXERCISER

To mount the elliptical exerciser, hold the handlebars and step onto the pedal that is in the lowest position. Next, step onto the other pedal. Push the pedals until they begin to move with a continuous motion.

Then, step off the lowest pedal.