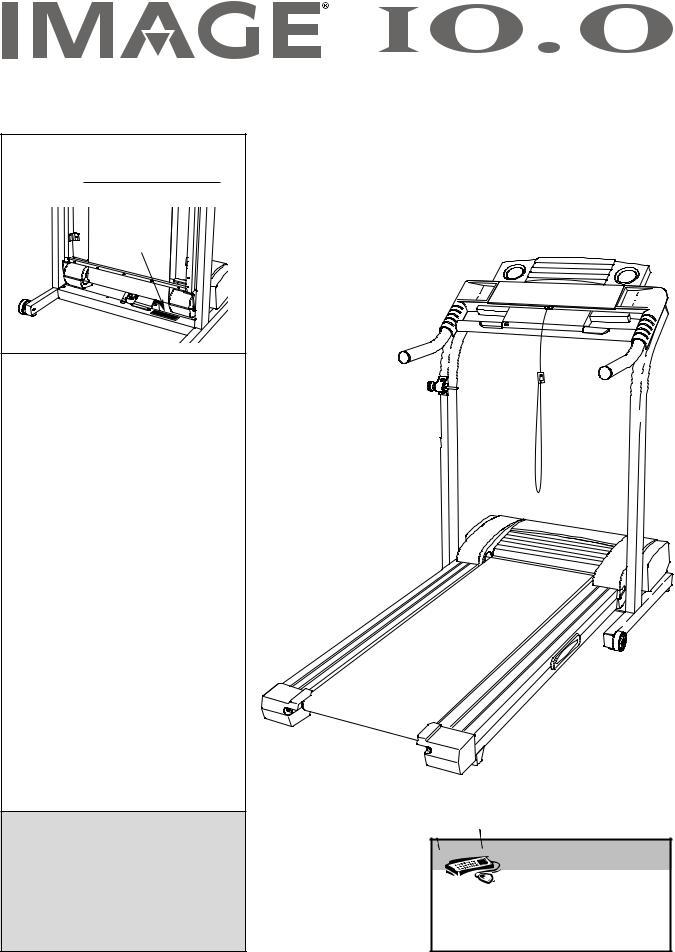 If you have questions, or if there are missing or damaged parts, we will guarantee complete satisfaction through direct assistance from our factory.

The trained technicians on our Customer Hot Line will provide immediate assistance, free of charge to you.

Read all precautions and instructions in this manual before using this equipment. Save this manual for future reference.

Note: An EXPLODED DRAWING and a PART LIST are attached in the center of this manual.

IMAGE is a registered trademark of ICON IP, Inc. 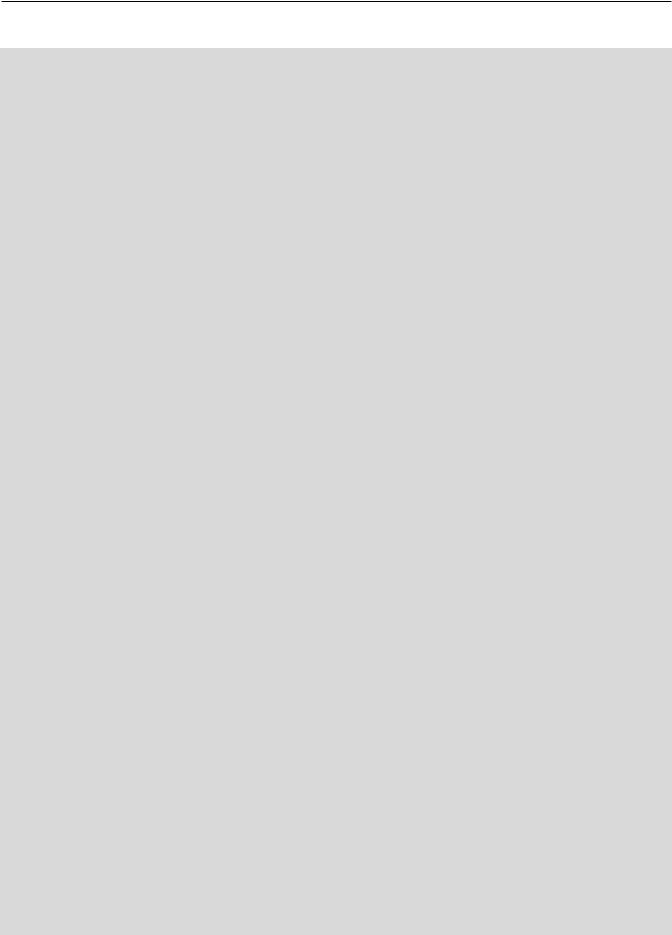 WARNING: To reduce the risk of burns, fire, electric shock, or injury to persons, read the following important precautions and information before operating the treadmill.

1.It is the responsibility of the owner to ensure that all users of this treadmill are adequately informed of all warnings and precautions.

2.Use the treadmill only as described.

5.Do not operate the treadmill where aerosol products are used or where oxygen is being administered.

6.Keep children under the age of 12 and pets away from the treadmill at all times.

7.The treadmill should not be used by persons weighing more than 250 pounds.

8.Never allow more than one person on the treadmill at a time.

9.Wear appropriate exercise clothes when using the treadmill. Do not wear loose clothes that could become caught in the treadmill. Athletic support clothes are recommended for both men and women. Always wear athletic shoes. Never use the treadmill with bare feet, wearing only stockings, or in sandals.

11.Use only a single-outlet surge suppressor that meets all of the specifications described on page 9. To purchase a surge suppressor, see your local IMAGE dealer or call 1-800-753-4645 and order part number 146148.

13.Keep the power cord and the surge suppressor away from heated surfaces.

15.Never start the treadmill while you are standing on the walking belt. Always hold the handrails while using the treadmill.

16.The treadmill is capable of high speeds. Adjust the speed in small increments to avoid sudden jumps in speed.

18.Never leave the treadmill unattended while it is running. Always remove the key, and unplug the power cord when the treadmill is not in use.

21.When folding or moving the treadmill, make sure that the storage latch is fully closed. 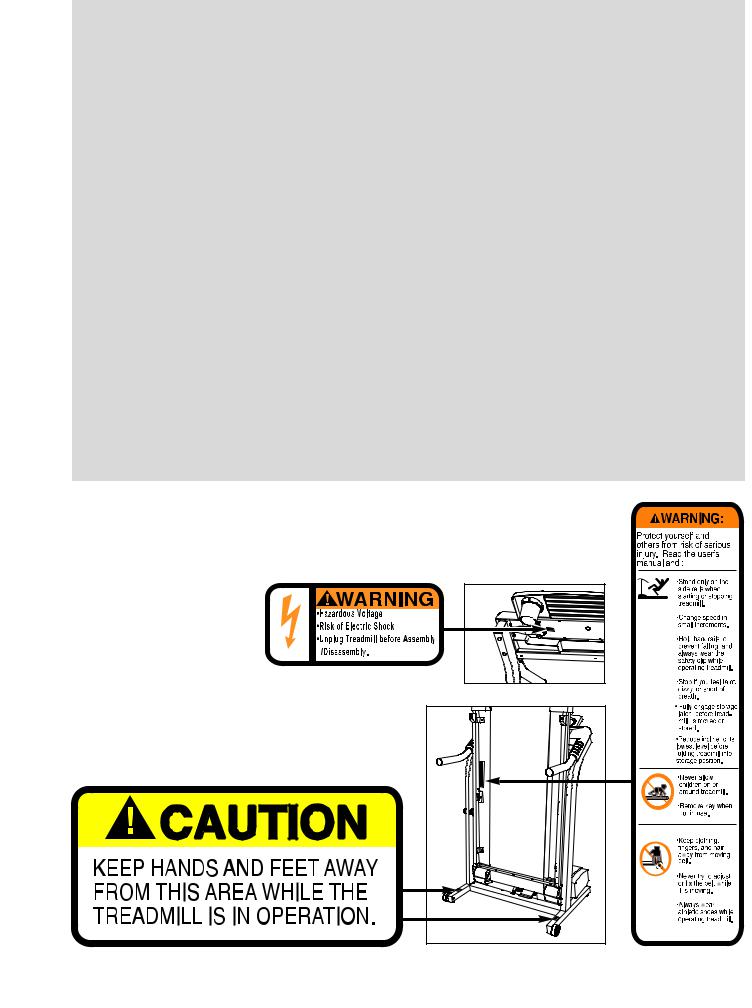 22.When using iFIT.com CDs and videos, an electronic “chirping” sound will alert you when the speed of the treadmill is about to change. Always listen for the “chirp” and be prepared for speed changes. In some instances, the speed may change before the personal trainer describes the change.

23.When using iFIT.com CDs and videos, you can manually override the speed setting at any time by pressing the speed buttons.

However, when the next “chirp” is heard, the speed will change to the next settings for the CD or video program.

24.Always remove iFIT.com CDs and videos from your CD player or VCR when you are not using them.

25.Inspect and properly tighten all parts of the

26.Never insert or drop any object into any opening.

27.DANGER: Always unplug the power cord immediately after use, before cleaning the treadmill, and before performing the maintenance and adjustment procedures described in this manual. Never remove the motor hood unless instructed to do so by an authorized service representative. Servicing other than the procedures in this manual should be performed by an authorized service representative only.

28.This treadmill is intended for in-home use only. Do not use this treadmill in any commercial, rental, or institutional setting.

The decals shown have been placed on your treadmill. If a decal is missing, or if it is not legible, please call our Customer Service Department, toll-free, to order a free replacement decal (see the front cover of this manual). Apply the decal in the location shown. Note: The decals are not all shown at actual size. 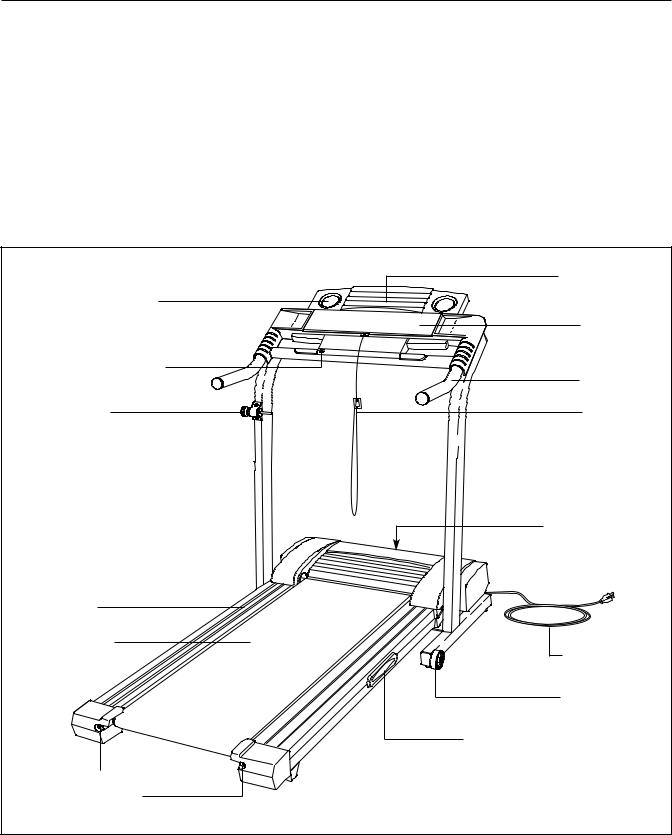 Thank you for selecting the new IMAGE® 10.0 treadmill. The 10.0 treadmill combines advanced technology with innovative design to help you get the most from your exercise program in the convenience of your home. And when you’re not exercising, the unique 10.0 treadmill can be folded up, requiring less than half the floor space of other treadmills.

For your benefit, read this manual carefully before using the treadmill. If you have questions after reading this manual, please call our Customer Service

Department toll-free at 1-800-753-4645, Monday through Friday, 6 a.m. until 6 p.m. Mountain Time (excluding holidays). To help us assist you, please note the product model number and serial number before calling. The model number of the treadmill is IMTL39526. The serial number can be found on a decal attached to the treadmill (see the front cover of this manual for the location).

Before reading further, please review the drawing below and familiarize yourself with the labeled parts. 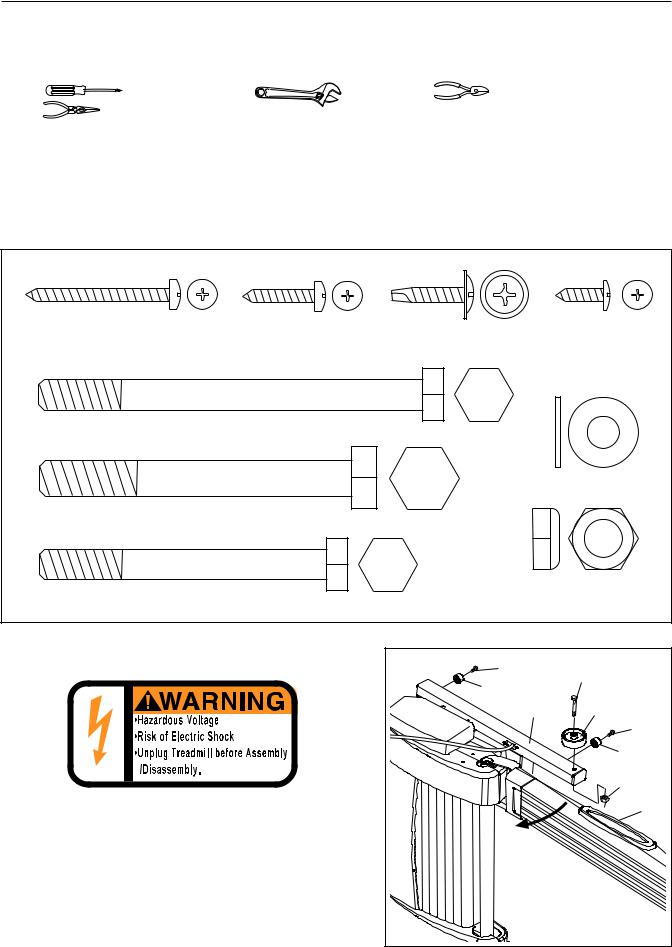 To identify small parts during assembly, use the part identification drawings below.

1. Make sure that the power cord is not plugged in.

3.Make sure that the Right Upright (10) is turned so it bends in the direction shown. Insert two 3” Bolts (47) with Washers (29) through the Base (82), and hand tighten the Bolts into the lower end of the Right Upright.

With the help of a second person, tip the treadmill onto its other side and repeat steps 1 through 3.

Note: There is not a wire harness in the Left Upright (not shown). One extra Base Pad my be included.

4.With the help of a second person, set the treadmill flat on the floor so the Right Upright (10) and the Left Upright (not shown) are vertical.

Insert the 5-wire connector into the black socket beneath the Console Base (87) in the same way. Make sure that the connectors and wires appear as shown in the inset drawing. Insert the excess Wire Harness (17) down through the Handrail (85). Securely tighten the Plastic Ties (108) to prevent the Wire Harness from slipping. Then, cut off the ends of the Plastic Ties.

Make sure that the two Cup Holders (118) are pressed into the round holes in the top of the Console Base (87).

10.Make sure that all parts are properly tightened before you use the treadmill. Note: Extra hardware may be included. Keep the included allen wrench in a secure place; the allen wrench is used to adjust the walking belt (see page 23). To protect the floor or carpet from damage, place a mat under the treadmill. 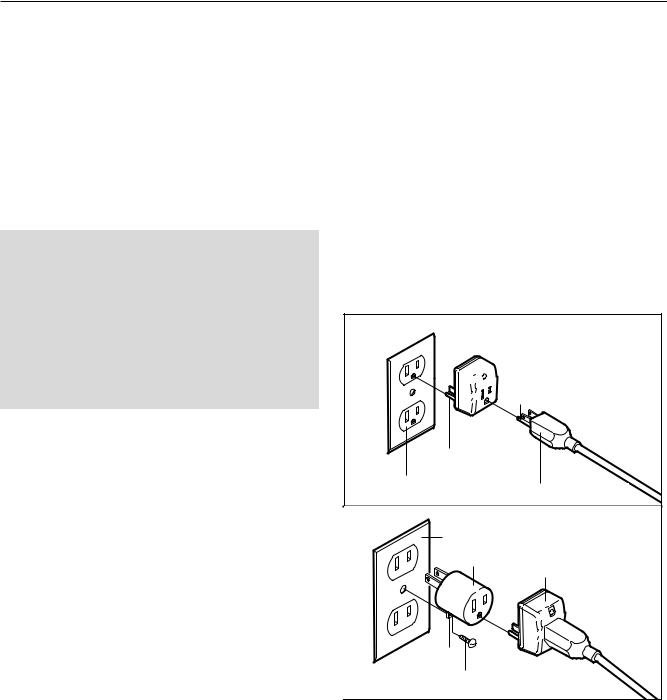 Your treadmill features a walking belt coated with PERFORMANT LUBETM, a high-performance lubricant.

HOW TO PLUG IN THE POWER CORD

DANGER: Improper connection of the equipment-grounding conductor can result in an increased risk of electric shock. Check with a qualified electrician or serviceman if you are in doubt as to whether the product is properly grounded. Do not modify the plug provided with the product—if it will not fit the outlet, have a proper outlet installed by a qualified electrician.

Your treadmill, like any other type of sophisticated electronic equipment, can be seriously damaged by sudden voltage changes in your home’s power. Voltage surges, spikes, and noise interference can result from weather conditions or from other appliances being turned on or off. To decrease the possibility of your treadmill being damaged, always use a surge suppressor with your treadmill (see drawing 1 at the right). To purchase a surge suppressor, see your local IMAGE dealer or call 1-800-753- 4645 and order part number 146148.

This product must be grounded. If it should malfunction or break down, grounding provides a path of least resistance for electric current to reduce the risk of electric shock. This product is equipped with a cord having

an equipment-grounding conductor and a grounding plug. Plug the power cord into a surge suppressor, and plug the surge suppressor into an appropriate outlet that is properly installed and grounded in accordance with all local codes and ordinances. Important: The treadmill is not compatible with GFCI-equipped outlets.

The temporary adapter should be used only until a properly grounded outlet (drawing 1) can be installed by a qualified electrician.

The green-colored rigid ear, lug, or the like extending from the adapter must be connected to a permanent ground such as a properly grounded outlet box cover. Whenever the adapter is used it must be held in place by a metal screw. Some 2-pole receptacle outlet box covers are not grounded. Contact a qualified electrician to determine if the outlet box cover is grounded before using an adapter.