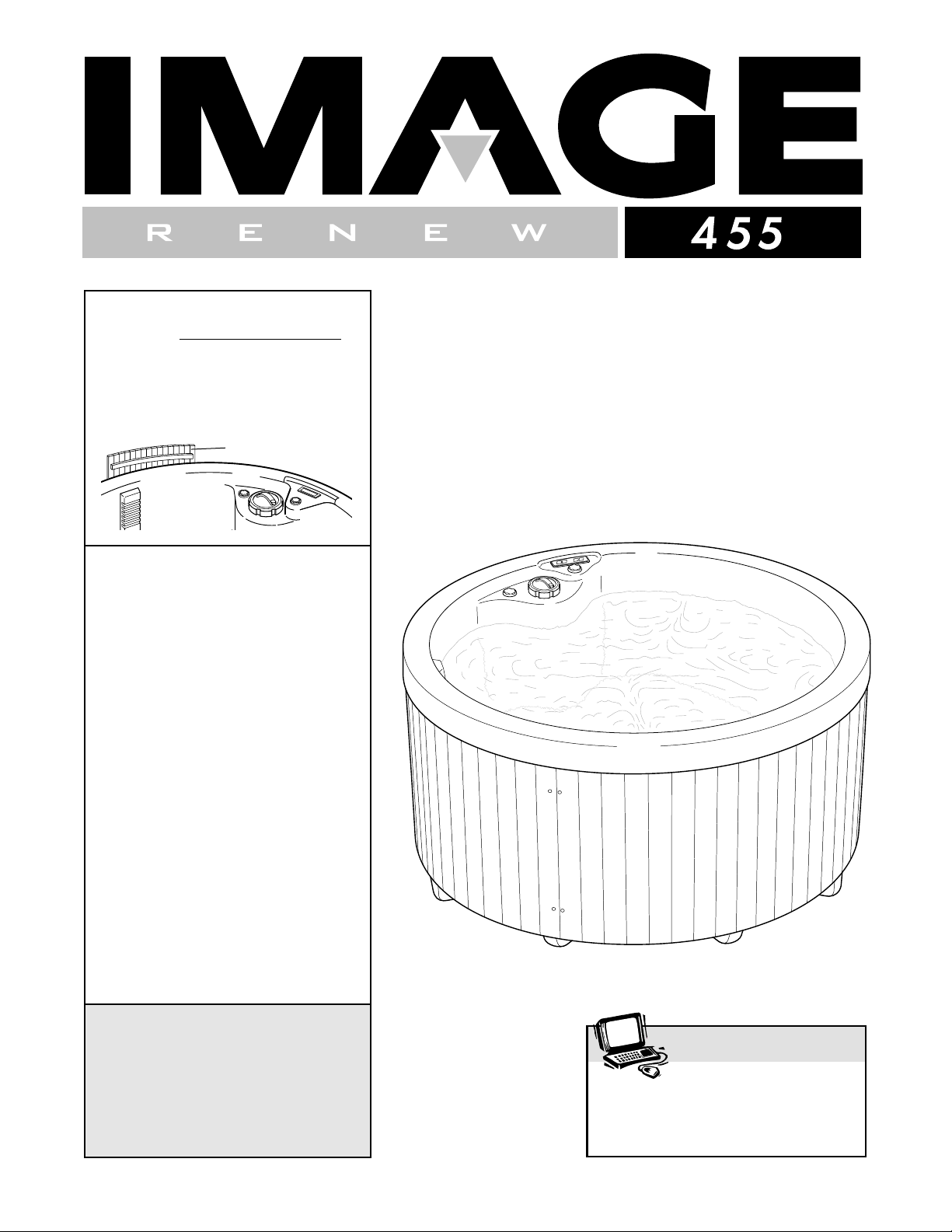 ®
USER’S MANUAL
QUESTIONS?
As a manufacturer, we are com-
mitted to providing complete
customer satisfaction. If you
have questions, or if there are
missing parts, we will guarantee
complete satisfaction through
direct assistance from our factory.
TO AVOID UNNECESSARY
DELAYS, PLEASE CALL DIRECT
TO OUR TOLL-FREE CUSTOMER
HOT LINE. The trained techni-
cians on our customer hot line
will provide immediate assis-
tance, free of charge to you.
CUSTOMER HOT LINE:
1-877-897-7493
Mon.–Fri., 6 a.m.–6 p.m. MST
Model No. IMHS45592
Serial No.
The serial number is found on a plastic
sign inside the spa behind the access
panel. Write the serial number in the
space above for reference.
CAUTION
Read all precautions and instruc-
tions in this manual before using
this equipment. Save this manual
for future reference.
Visit our website at
www.workoutwarehouse.com
new products, prizes,
fitness tips, and much more!
Access Panel 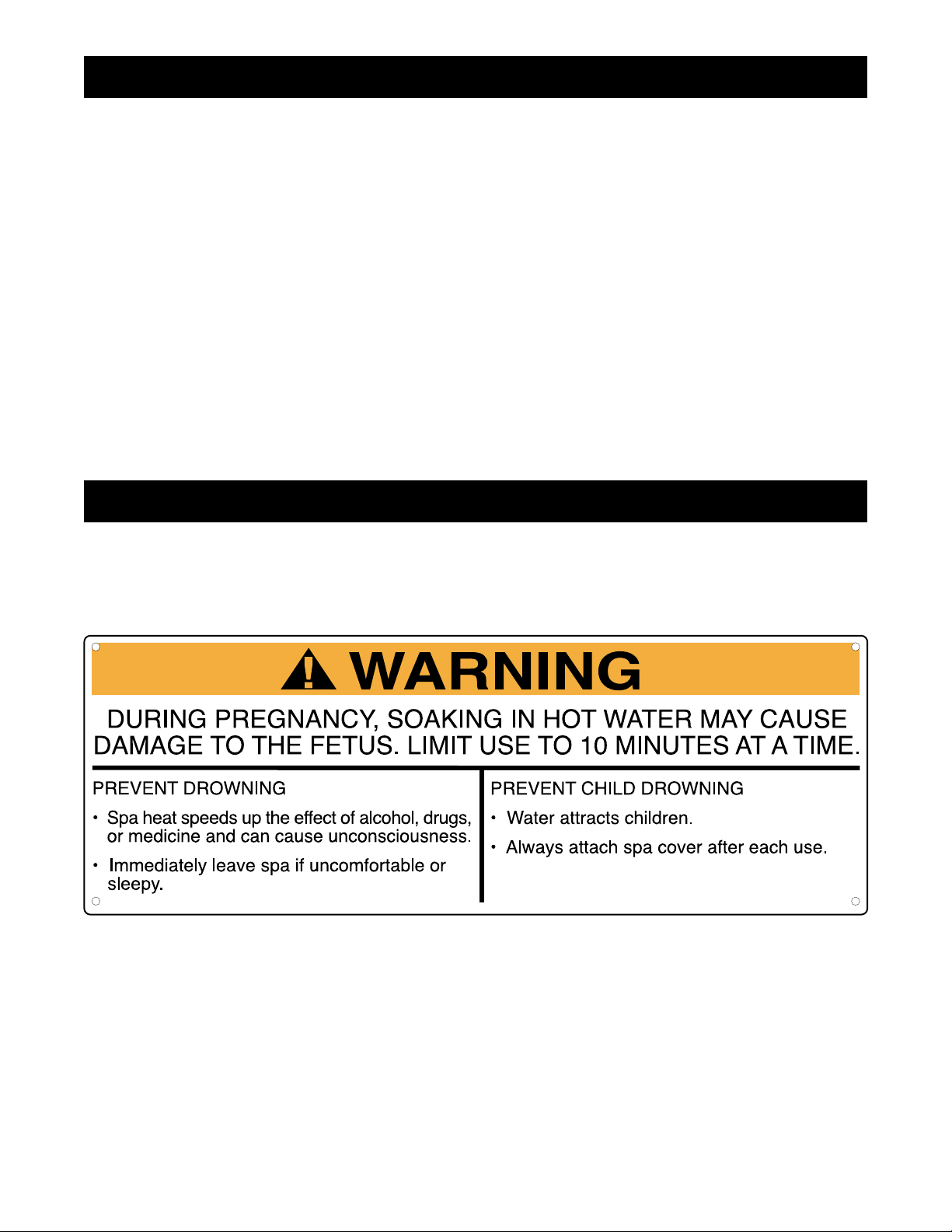 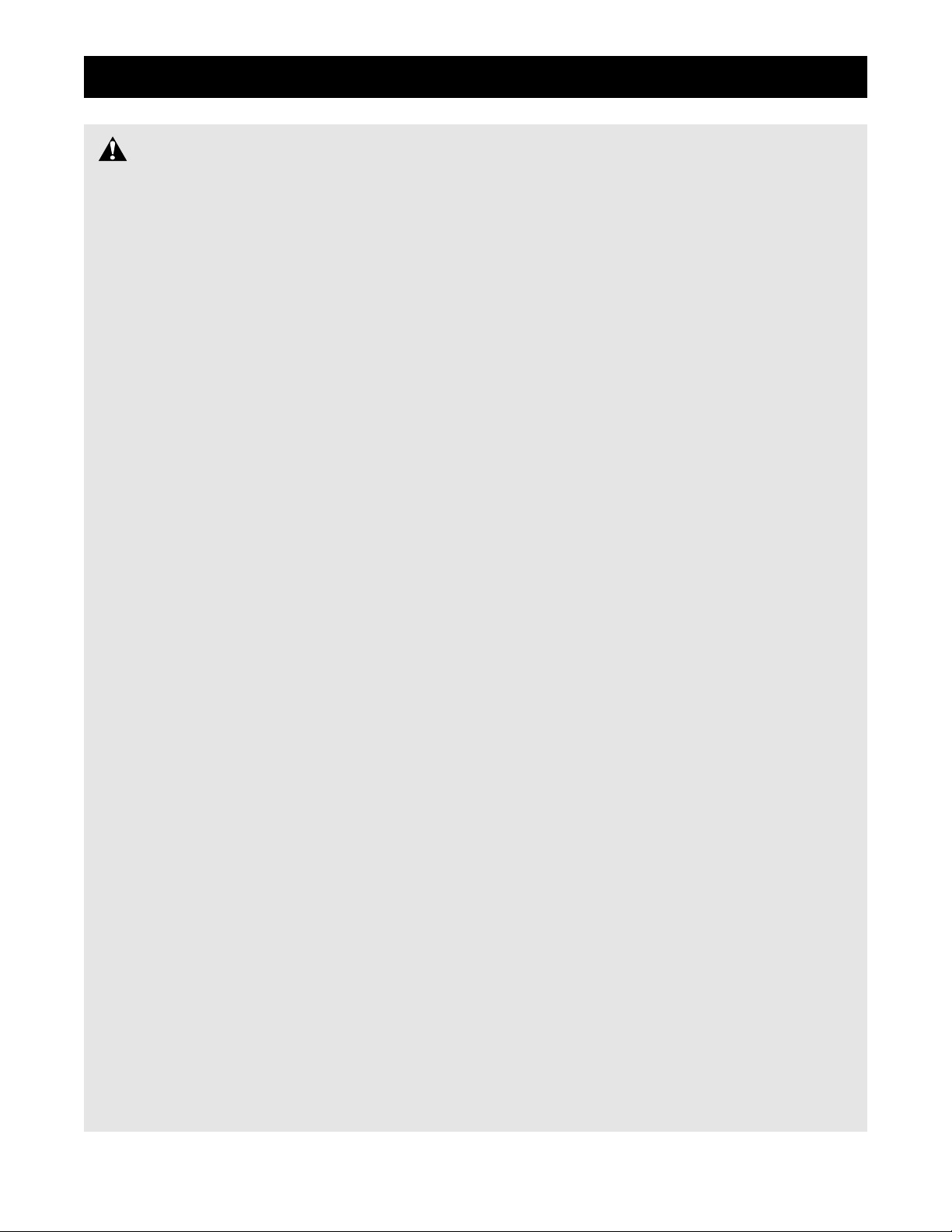 3
WARNING:To reduce the risk of drowning, electric shock, or serious injury, read the fol-
lowing important precautions before using the hydrotherapy spa.
READ AND FOLLOW ALL INSTRUCTIONS
1. It is the responsibility of the owner to ensure
that all users of the hydrotherapy spa are
adequately informed of all precautions.
2. Use the hydrotherapy spa only as described
in this manual.
3. The hydrotherapy spa is intended for home
use only. Do not use the spa in a commercial,
rental, or institutional setting.
4. Use the hydrotherapy spa only on a level sur-
face. Do not use the spa on carpet or other
materials that could be damaged by moisture.
5. The hydrotherapy spa will weigh approxi-
mately 2,133 pounds when it is filled with
water. Make sure that the location you select
for the spa will support this weight, plus the
weight of the occupants.
6. Inspect and tighten all parts regularly.
Replace any worn parts immediately.
7. DANGER—Risk of injury: Do not remove or
alter the covers on the suction fittings. Never
operate the hydrotherapy spa if the suction
guard is missing or broken. If you need to
replace a suction fitting or pump, make sure
you use only manufacturer recommended
replacement parts. Keep hair and body parts
away from the suction guard. Do not allow
long hair to float freely in the water; long hair
should be restrained with a bathing cap.
8. IMPORTANT: Do not allow the hydrotherapy
spa to be exposed to direct sunlight when it
is empty. The surface of the spa shell can
reach temperatures as high as 150°F in a mat-
ter of minutes if exposed to the sun while it is
empty. These high temperatures can cause
significant damage, such as blistering of the
shell surface and warping of the spa shell.
Any damage caused by sun exposure is not
covered under the warranty.
9. Do not bring any object into the hydrotherapy
spa that could damage the spa shell.
10.Never insert any object into any opening.
11.Do not use breakable containers in or near
the hydrotherapy spa.
12.Do not sit on the spa cover or place objects
on it; it is not designed to support weight.
13.Remove any water or debris that may collect
on the spa cover.
14.Keep children under the age of 12 and pets
away from the hydrotherapy spa when it is
not in use.
15.Keep all chemicals away from children and
pets.
16.The pH and chemical balance of the water
must be maintained as explained in this man-
ual (see pages 10 and 14). Failure to do so
may cause injury to users or damage to the
hydrotherapy spa, and will void the warranty.
17.Individuals with infections and open sores or
wounds should not use the hydrotherapy
spa. Bacteria thrive in warm and hot water.
Always keep your spa disinfected and main-
tain the proper chemical balance.
18.Shower before and after using the hydrother-
apy spa. This will remove any deodorant, per-
spiration, or body oils that could contaminate
the water. Showering after will remove any
residual chemicals and any bacteria that may
have been in the spa.
19.DANGER—When connecting the power cord
(see PLUGGING IN THE HYDROTHERAPY
SPA on page 10), plug the power cord directly
into a grounded circuit capable of carrying 15
or more amps. No other appliance should be
on the same circuit. Replace the power cord
immediately if damaged.
20.Do not use an extension cord with the
hydrotherapy spa. This could damage the
motor and will void the warranty.
Important Safety Instructions 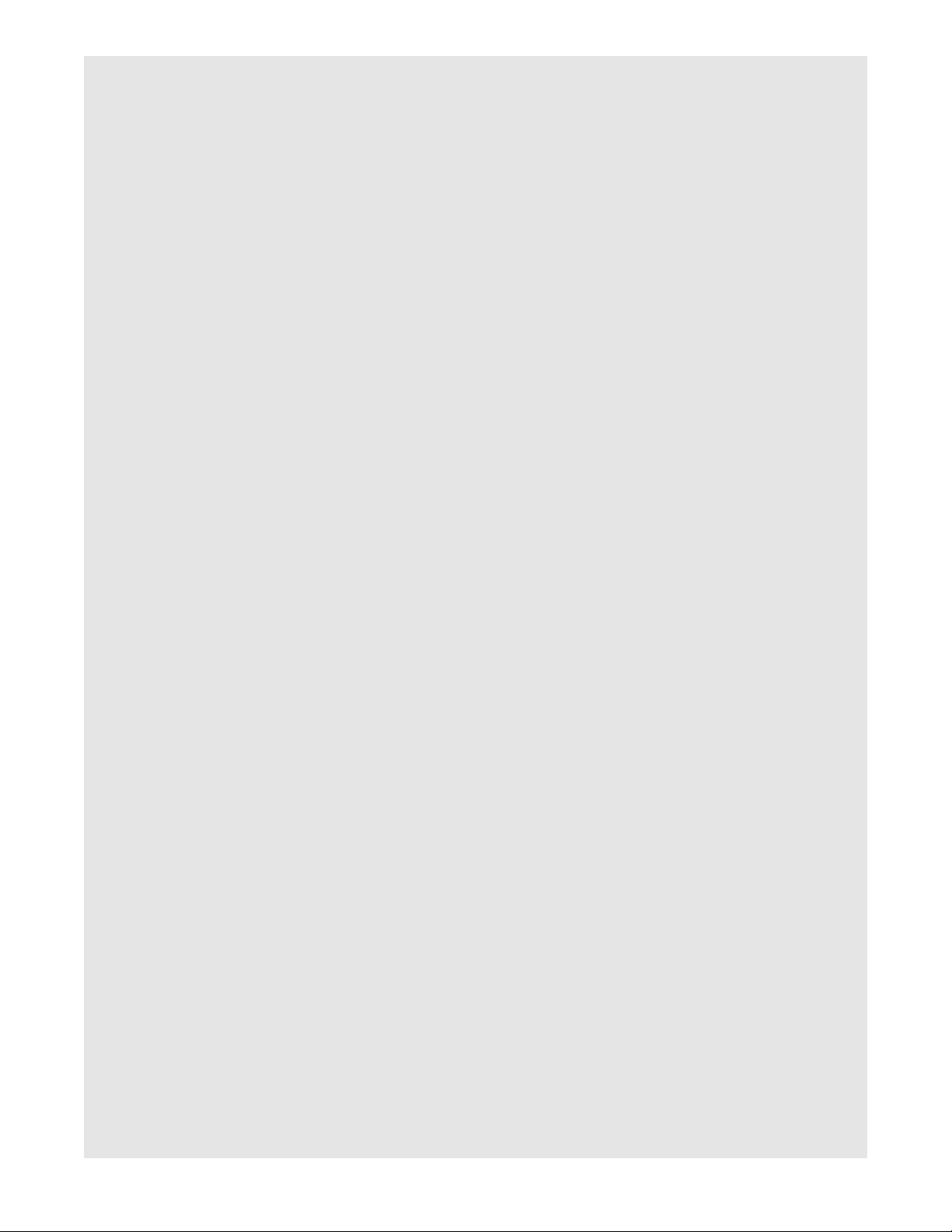 4
21.DANGER—If you will be using the hydrother-
apy spa outside, do not bury the power cord.
Keep the power cord away from lawn mow-
ers, hedge trimmers, and other similar equip-
ment.
22.WARNING—The power cord is equipped with
a Ground Fault Circuit Interrupter (GFCI),
located on the power cord. The GFCI must be
tested before each use. To test the GFCI,
press the “test” button while the hydrothera-
py spa is running. The spa should shut off.
Press the “reset” button. The spa should
resume normal operation. If the spa contin-
ues to run after the “test” button is pressed,
the GFCI is damaged. Do not use the spa
until the GFCI has been repaired or replaced
by a qualified electrician.
23.DANGER—Risk of electric shock. Keep all
electrical appliances such as radios, tele-
phones, televisions, and lights at least five
feet away from the water.
24.A wire connector is provided on the pump
motor of the hydrotherapy spa to connect a
minimum No. 8 AWG (804 mm
2
) solid copper
conductor between the spa and any metal
equipment, electrical enclosure made of
metal, metal water pipes, or conduit within
five feet of the spa.
25.DANGER—Risk of electric shock: Do not set
the hydrotherapy spa within five feet of any
metal objects or surfaces. As an alternative,
you may use the spa within five feet of metal
objects if each metal object is permanently
connected to the wire connector on the pump
motor of the spa by a minimum No. 8 AWG
(804 mm
2
) solid copper conductor (see
instruction 24).
26.Do not operate the pump motor when the
hydrotherapy spa is empty. The pump motor
may be seriously damaged if it is operated
without water circulating.
27.DANGER—Risk of drowning: Exercise
extreme caution to prevent unauthorized and
unsupervised use of the hydrotherapy spa by
children. Children must always be supervised.
28.DANGER—To reduce the risk of drowning:
• Never use the hydrotherapy spa alone.
• Children should not use the spa unless they
are supervised by an adult.
• Keep pets away from the spa at all times.
• Always replace and lock the spa cover when
the spa is not in use.
29.WARNING—To reduce the risk of injury: The
water temperature should never exceed
104°F. Temperatures between 100°F and 104°F
are considered to be safe for healthy adults.
However, if you plan to remain in the hydro-
therapy spa for more than 10 to 15 minutes, a
lower temperature is recommended. Lower
temperatures are also recommended for chil-
dren. Children should not be allowed to swim
under the surface of the water in the spa.
30.WARNING—To reduce the risk of injury:
Before entering the hydrotherapy spa, always
use an accurate thermometer to determine
the water temperature.
31.WARNING—To reduce the risk of injury:
Pregnant women should consult with their
physician before using the hydrotherapy spa.
Pregnant women should not use the spa if
the water temperature is above 100°F; the
unborn child could be seriously harmed. This
is especially important during the first 90
days of the pregnancy.
32.DANGER—To reduce the risk of drowning:
Prolonged immersion in the hydrotherapy spa
may cause hyperthermia, a dangerous condi-
tion that occurs when the internal body tem-
perature rises several degrees above the nor-
mal body temperature of 98.6°F. The symp-
toms of hyperthermia are nausea, dizziness,
drowsiness, and fainting. Effects include: a
lack of awareness, inability to perceive heat
or danger, and a greater risk of drowning due
to a loss of consciousness. Special note:
Individuals suffering from hyperthermia may
be unable to realize that they must exit the
spa, and they also may be physically unable
to do so.
33.WARNING—To reduce the risk of drowning:
Do not use the hydrotherapy spa if you are
under the influence of alcohol or drugs. Heat
from the water, in conjunction with alcohol or
drugs, can cause loss of consciousness.
34.WARNING—To reduce the risk of injury or
drowning: Consult your physician about pos-
sible side-effects of any medications you may
be taking before using the hydrotherapy spa.
Heat from the water, in conjunction with some
medications, may cause drowsiness and
increase the risk of drowning. Other medica-
tions can effect blood pressure, heart rate,
and circulation.
35.Do not use the hydrotherapy spa immediately
after strenuous exercise. 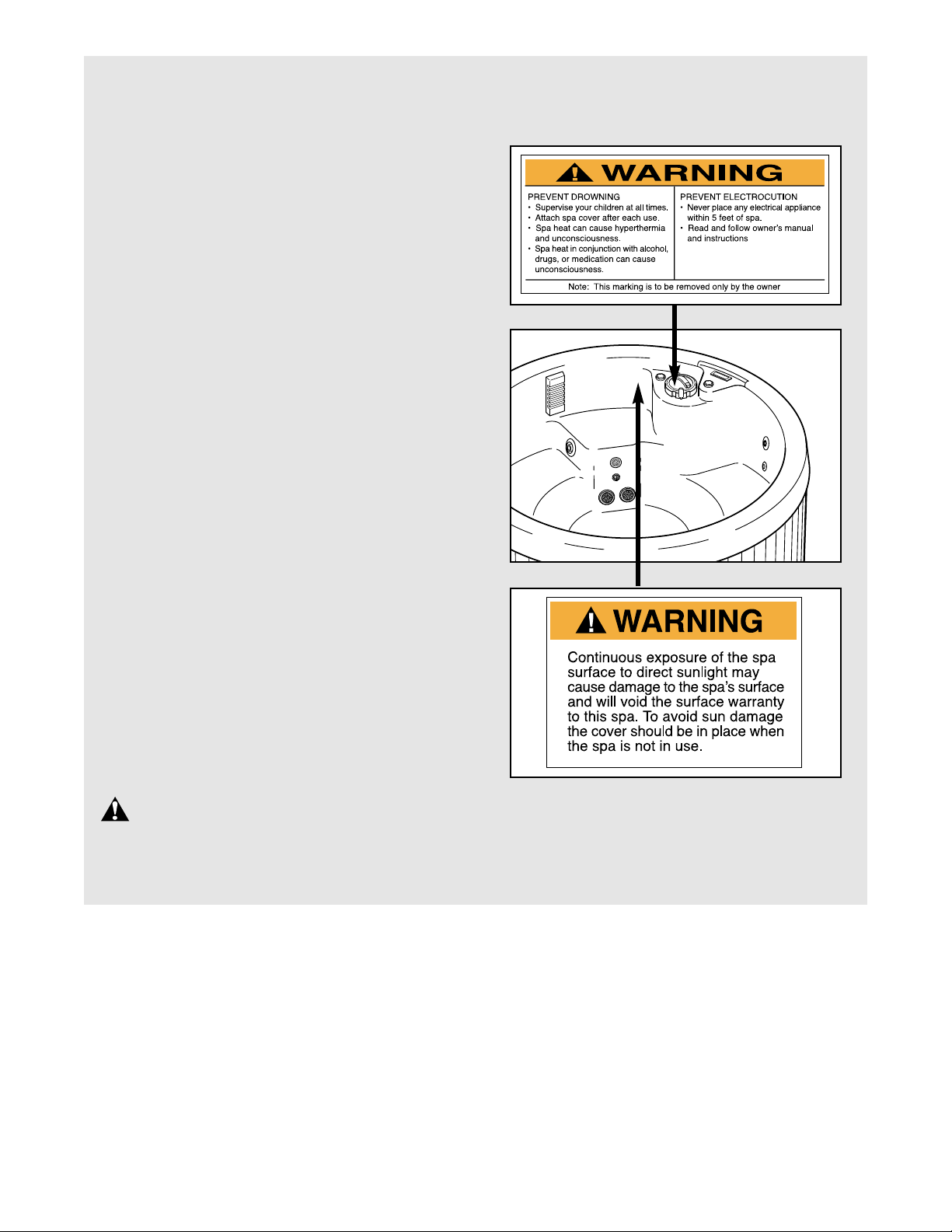 5
WARNING:Read all instructions before using the hydrotherapy spa. ICON assumes no
responsibility for personal injury or property damage sustained by or through the use of this product.
SAVE THESE INSTRUCTIONS
36. If you feel pain or dizziness at any time while
using the hydrotherapy spa, discontinue use
and contact a physician.
37.WARNING—To reduce the risk of injury: It is
especially important for persons over the age
of 35 or persons with pre-existing health
problems, such as obesity, heart disease,
high or low blood pressure, circulatory prob-
lems, or diabetes to consult their physician
before using the hydrotherapy spa.
38.WARNING: The spa jets produce a stream of
water with relatively high pressure. Prolonged
exposure of a localized area of the body may
cause bruises to the skin.
39.The included warning sign must be posted
where all users of the hydrotherapy spa can
see and read it. (See POSTING THE WARNING
SIGN on page 2.)
40.The causes, symptoms and effects of hyper-
thermia may be described as follows: Hyper-
thermia occurs when the internal temperature
of the body reaches a level of several degrees
above the normal body temperature of 98.6˚F.
The symptoms of hyperthermia include an
increase in the internal temperature of the
body, dizziness, lethargy, drowsiness and
fainting. The effects of hyperthermia include
failure to perceive heat; failure to recognize
the need to exit the spa or hot tub; unaware-
ness of impending hazard; fetal damage in
pregnant women; physical inability to exit the
spa or hot tub and unconsciousness resulting
in danger of drowning. WARNING: The use of
alcohol, drugs or medication can greatly
increase the risk of fatal hyperthermia.
41.WARNING DECAL PLACEMENT: Locate the
decals shown below and familiarize yourself
with the information on the decals. 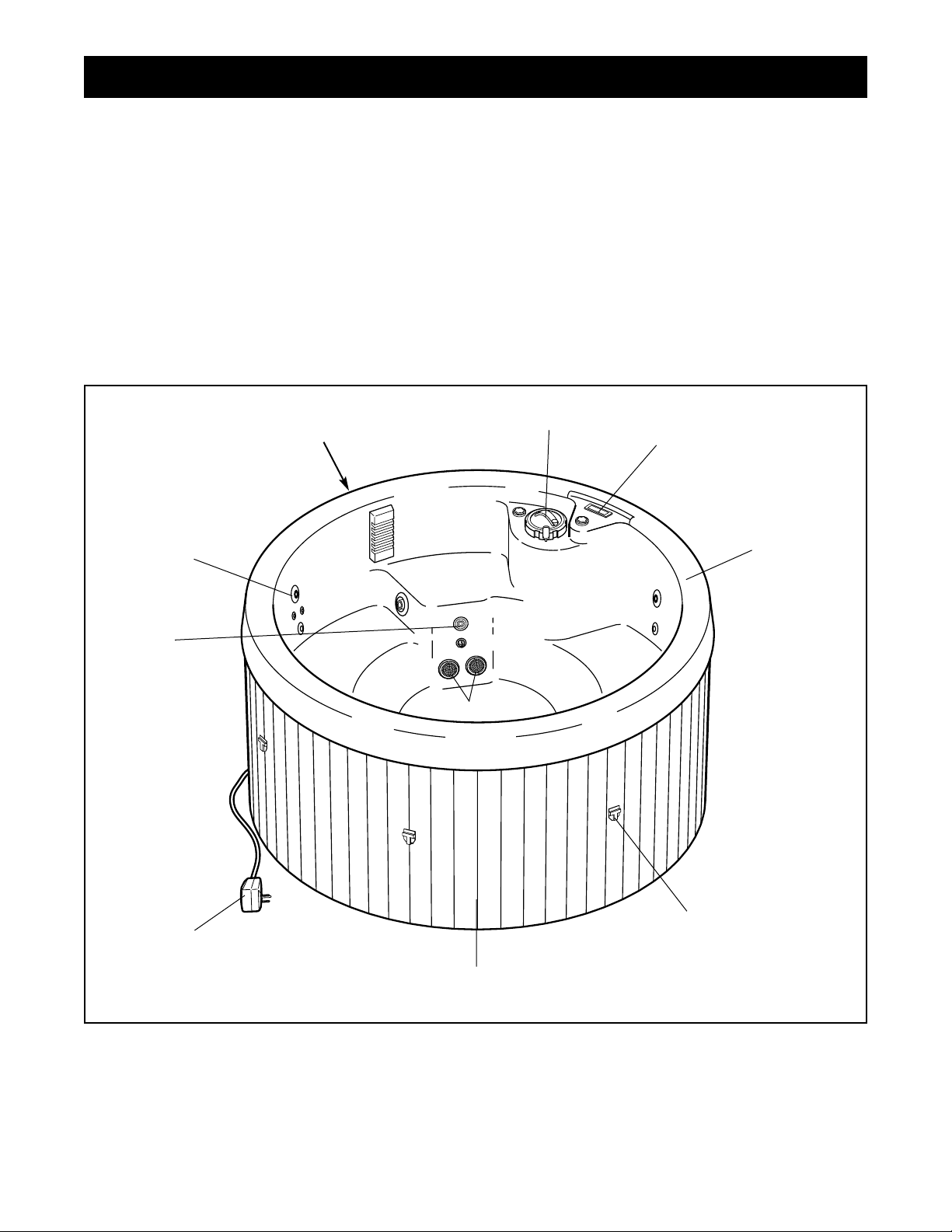 6
Congratulations for selecting the new IMAGE
®
RENEW 455 hydrotherapy spa. The innovative
RENEW 455 allows you to enjoy all the benefits of
hydrotherapy in the comfort and privacy of your home.
Hydrotherapy is a proven method for soothing tired
muscles after exercise or for relieving the stress of a
busy life. The warm environment stimulates blood flow,
which is essential in the healing process, and the
powerful massage action further eases tension and
stress throughout the body. The RENEW 455 hydro-
therapy spa gives you the specialized treatment you
need to feel your best.
For your benefit, read this manual carefully before
using the RENEW 455. If you have additional ques-
tions, please call our Customer Service Department
toll-free at 1-877-897-7493, Monday through Friday,
6 a.m. until 6 p.m. Mountain Time (excluding holidays).
To help us assist you, please mention the product
model number and serial number when calling. The
model number is IMHS45592. The serial number can
be found on a decal attached to the frame inside the
spa (see the front cover of this manual).
Before reading further, please familiarize yourself with
the parts that are labeled in the drawing below.
Surround
Suction Vents
Locking
Buckle
Access Panel
Console
Power Cord with
Ground Fault
Circuit Interrupter
(GFCI)
Spa Shell
Filter
Jets
Light
Before You Begin
+ 14 hidden pages
You can only view or download manuals with
Sign Up and get 5 for free
Upload your files to the site. You get 1 for each file you add
Get 1 for every time someone downloads your manual
Buy as many  as you need
View and download manuals available only for
Register and get 5 for free
Upload manuals that we do not have and get 1 for each file
Get 1 for every download of your manual
Buy  as much as you need