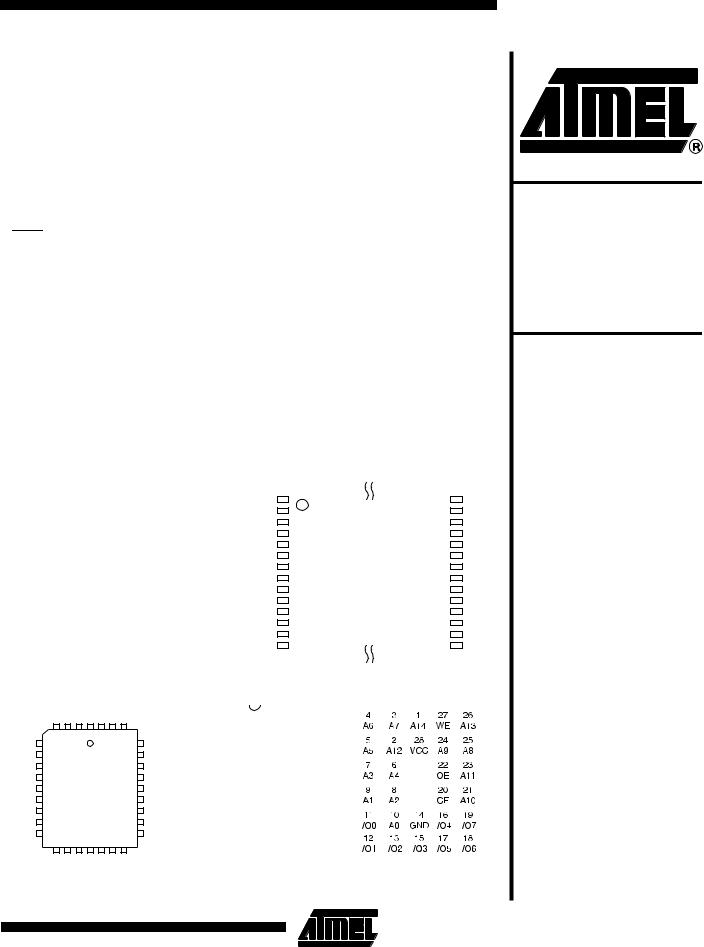 The AT28HC256 is a high-performance Electrically Erasable and Programmable Read Only Memory. Its 256K of memory is organized as 32,768 words by 8 bits. Manufactured with Atmel’s advanced nonvolatile CMOS technology, the AT28HC256 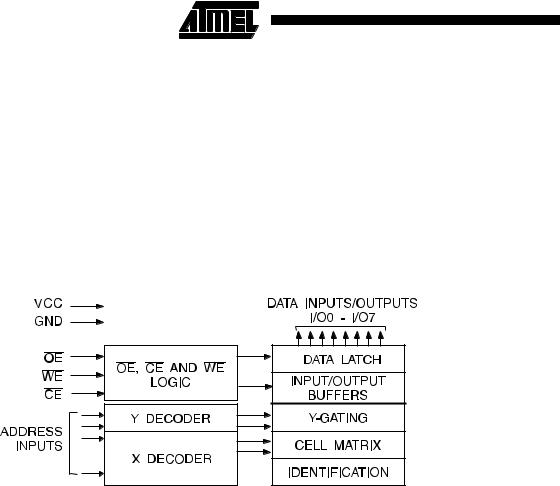 offers access times to 70 ns with power dissipation of just 440 mW. When the AT28HC256 is deselected, the standby current is less than 5 mA.

polling of I/O7. Once the end of a write cycle has been detected a new access for a read or write can begin. 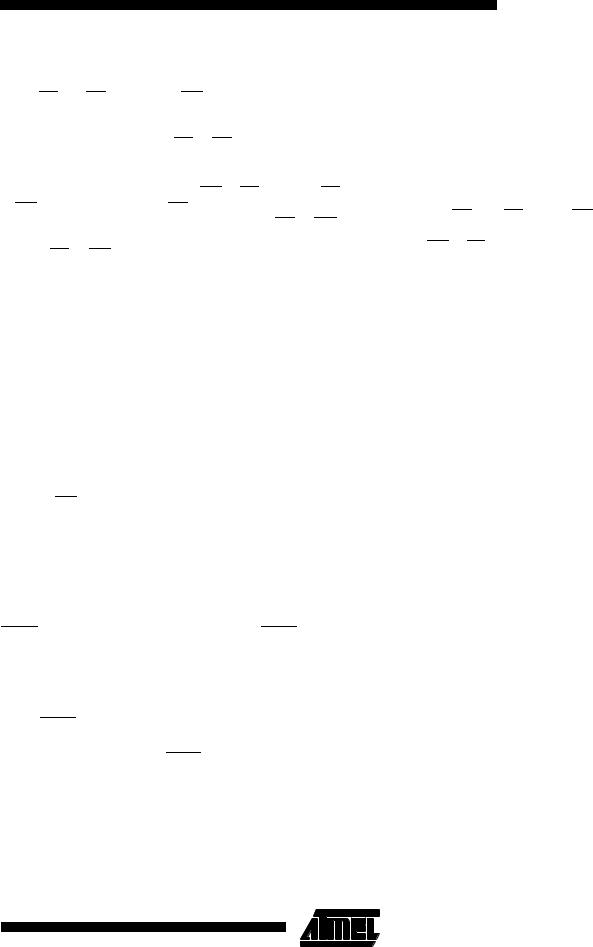 READ: The AT28HC256 is accessed like a Static RAM. When CE and OE are low and WE is high, the data stored at the memory location determined by the address pins is asserted on the outputs. The outputs are put in the high impedance state when either CE or OE is high. This dualline control gives designers flexibility in preventing bus contention in their system.

BYTE WRITE: A low pulse on the WE or CE input with CE or WE low (respectively) and OE high initiates a write cycle. The address is latched on the falling edge of CE or WE, whichever occurs last. The data is latched by the first rising edge of CE or WE. Once a byte write has been started it will automatically time itself to completion. Once a programming operation has been initiated and for the duration of tWC, a read operation will effectively be a polling operation.

P A G E W R I T E : Th e pa ge w r it e op er a ti on o f th e AT28HC256 allows 1 to 64 bytes of data to be written into the device during a single internal programming period. A page write operation is initiated in the same manner as a byte write; the first byte written can then be followed by 1 to 63 additional bytes. Each successive byte must be written

within 150 μs (tBLC) of the previous byte. If the tBLC limit is exceeded the AT28C256 will cease accepting data and

TOGGLE BIT: In addition to DATA Polling the AT28HC256 provides another method for determining the end of a write cycle. During the write operation, successive attempts to read data from the device will result in I/O6 toggling between one and zero. Once the write has completed, I/O6 will stop toggling and valid data will be read. Testing the toggle bit may begin at any time during the write cycle.

DATA PROTECTION: If precautions are not taken, inadvertent writes to any 5-volt-only nonvolatile memory may

occur during transition of the host system power supply. Atmel has incorporated both hardware and software features that will protect the memory against inadvertent writes.

HARDWARE PROTECTION: Hardware features protect against inadvertent writes to the AT28HC256 in the following ways: (a) VCC sense—if V CC is below 3.8V (typical) the write function is inhibited; (b) VCC power-on delay—once VCC has reached 3.8V the device will automatically time out 5 ms typical) before allowing a write; (c) write inhibit—hold- ing any one of OE low, CE high or WE high inhibits write cycles; and (d) noise filter—pulses of less than 15 ns (typical) on the WE or CE inputs will not initiate a write cycle.

SOFTWARE DATA PROTECTION: A software controlled data protection feature has been implemented on the AT28HC256. When enabled, the software data protection (SDP), will prevent inadvertent writes. The SDP feature may be enabled or disabled by the user; the AT28HC256 is shipped from Atmel with SDP disabled.

SDP is enabled by the host system issuing a series of three write commands; three specific bytes of data are written to three specific addresses (refer to Software Data Protection Algorithm). After writing the 3-byte command sequence and after tWC the entire AT28HC256 will be protected against inadvertent write operations. It should be noted, that once protected the host may still perform a byte or page write to the AT28HC256. This is done by preceding the data to be written by the same 3-byte command sequence.

After setting SDP, any attempt to write to the device without the three byte command sequence will start the internal write timers. No data will be written to the device; however, for the duration of tWC, read operations will effectively be polling operations.

DEVICE IDENTIFICATION: An extra 64 bytes of EEPROM memory are available to the user for device identification. By raising A9 to 12V ± 0.5V and using address locations 7FC0H to 7FFFH the additional bytes may be written to or read from in the same manner as the regular memory array. 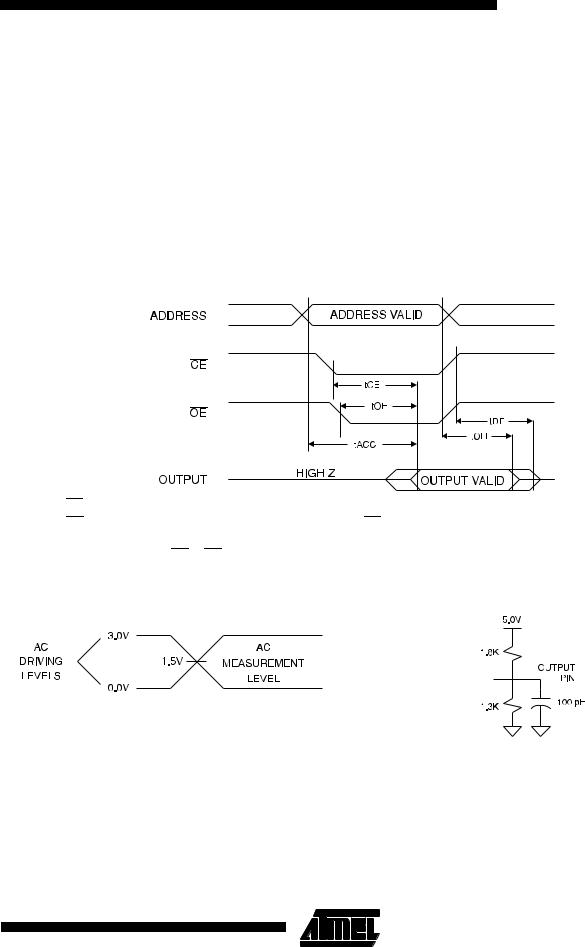 Notes: 1. CE may be delayed up to tACC - tCE after the address transition without impact on tACC.

4.This parameter is characterized and is not 100% tested.